Surgery On The Shoulders of Giants 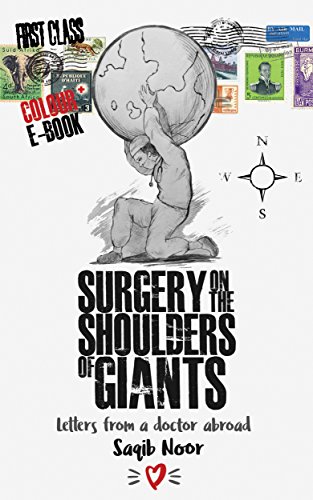 Surgery On The Shoulders of Giants
Letters from a doctor abroad
By Saqib Noor
Kings X Press – £8.99

The term institutionalised corruption suggests that corruption has slowly crept into the psyche of the Pakistani people and into its government institutions like a plague of insects, thoroughly rotting the once noble foundations before taking over the system like money sucking leeches. However this term seems rather mild in describing the current affairs in the country.

‘The Ministry Of Corruption (And Its Associated Buffoonery)’

That Pakistan’s former Prime Minister, Nawaz Sharif, recently resigned due to ‘dishonesty’ and corruption charges, would suggest said plague of insects have taken hold over the asylum. Or, in this instance, Pakistan, as if it were simply meant to happen.

I remember visiting the country on a couple of occasions (either side of 9/11) and in both instances, I was told by my host, that should we ever become separated, that under no circumstances was I to approach a policeman for help. Makes you think.

No wonder the country has an ”entire dedicated governmental Ministry of Corruption […] a specialised, well-formed institution with policymakers specifically producing disorganised and illogical thinking.”

But hey, wait; it’s already happening amid the epicentre of one of the most powerful countries on the planet. That’s right, Trump (who else?) and his co-conspirational cohorts from hell, subscribe to the very sort of illogical chutzpah – each and every one of us endeavour to avoid like cancer – on an almost daily basis. Hourly basis.

Makes the powers that be in Pakistan appear as if Noam Chomsky’s out on ethical manoeuvres, while this absolutely terrific book – the consummate template in what absolutely needs to be told. Right here. Right now.

Indeed, Surgery On The Shoulders of Giants – Letters from a doctor abroad, is, if nothing else, a mighty large humane inspiration.

Other than regaling the most varied and candid of ”human life lessons” from numerous front-line, health crisis constitutions in Myanmar, Ethiopia, Haiti, Cambodia, Pakistan, South Africa; its 197 pages (excluding many pages of black and white photographs) reveal sadness, truth, emotion, hypocrisy and of course, beauty.

Rather like that complex thing we oft refer to as life itself.
Powerful. Poignant. Persuasive.

One response to “Surgery On The Shoulders of Giants”