Song and Circumstance – The Work of David Byrne 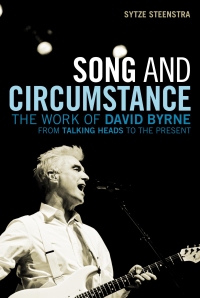 Song and Circumstance –
The Work of David Byrne
By Sytze Steenstra
Continuum – £14.99

It’s no surprise to learn that Sytze Steenstra, the author of this astute book of rather stoic and stern academic quiddity is both Dutch and a philosopher. Dutch (because so am I, and as such, the linearity of the writing is something I easily relate to), and a philosopher, due to the expansiveness of deliberation contained herein. Not to mention the all round dogmatic approach. Then of course, we have at the core of all this literary, circumambulatory information, David Byrne, an artist of enormous gestalt induced gravitas and idiosyncratic individuality.

So in all, Song and Circumstance – The Work of David Byrne from “Talking Heads” to the Present

makes for altogether enthralling, although at times, dense reading.

It’s as much an education, as it is assimilation through the rites of Byrne’s intellectual initiation, as it is a translucent and absolutist study of a unique artist – still delivering great work might I add.

That Steenstra (in the chapter ‘In The Visual Arena’) considers the new mythology of chaos in relation Byrne’s two books Strange Ritual and Your Action World: Winners are Losers with a New Attitude for instance, is surely testament to much of the above and a whole more besides: ‘’The idea that a new mythology was called for, as a meeting ground where science and morality, art, and philosophy can be freely mixed, was stated first by the group of early German Romantics, in the years 1795-1800, when Europe was in a state of political and spiritual turmoil following the French Revolution. While it may seem far-fetched to connect Byrne’s work to these writings of over 200 years ago, the formal analysis and playfulness that pervades their work is very close to the basic tenets of conceptual art.’’

Far fetched it isn’t, but such copious inference does indeed make for more of a resolute read as opposed to a diversionary and entertaining one. But in fairness, this is totally understandable given the nature of the artist himself, whom, with regards to the above mythology, the author quotes: ‘’God created Sins!… Sins are woven into the fabric of our lives… To abandon and ignore sin is to ignore and reject God’s handiwork. Sins are made by him – to enjoy and use until they have been eventually understood […]. Murder on the battlefield is an act of bravery, but in the home or in a public bathroom would be seen in a less flattering light. Is this a ‘bending’ of moral standards for the economic gain of war, as the Marxists would have us believe? Or, as the Social Darwinists maintain, are we simply animals at heart, creatures of habit and instinct…’’

Like David Byrne, this is a very varied and colourful book. It covers all of the artist’s relative terrain, in such a way that’s as equally as enthusiastic and passionate as he himself. From the exceptionally incomparable Talking Heads right through to the present – via Byrne’s many collaborations – Song and Circumstance

is both a terrific and constant read.

As the subject writes on the back cover: ‘’the book is delightfully and unusually free of gossip and psychological assumptions and explanations (not that those don’t also contain some truth); instead it focuses almost exclusively on what I’ve done, said or written – and comes to some conclusions that are (to me) surprising and unexpected. Sytze finds connections I wasn’t aware of, and continuity and patterns where initially one might see randomness and chaos. This book makes me seem both smarter than I am and possibly stranger than I am.’’

And as a fan, what more could you possibly ask for?

2 responses to “Song and Circumstance – The Work of David Byrne”