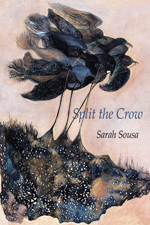 Either way, Sarah Sousa’s somewhat archaeological and testimonial Split The Crow, traverses a certain subject matter that is indeed, unquestionably steeped in the vast expanse of North American history.

That said, depending on one’s viewpoint and particular angle from which one embraces and ultimately connects with words, there’s more often than not a universality to be found. Regardless of initiation. Regardless of perplexity. The last four lines of this book’s very first poem, ‘Her Moods Caused Owls,’ is just such an instance – wherein ambiguity plays a large part:

I’m swallowing a story
that ends with blood-stained snow.
I know how this looks.
It appears to be true.

”[…] rife with surprise, rich with inventive images from the natural world, and delicious with music” is how Ellen Dore Watson describes this collection of intuitive poetry. And I know what she means; although as stated at the outset of this review, much of it is anchored within the very learned parameters of pre-ordained American knowledge. Whether it’s ‘John Eliot Creates Indian Grammar,’ ‘Doomed of Oklahoma,’ ‘Molly Became Cherokee,’ ‘Peculiar Confederacy’ or ‘The Pan-American Exhibition; Buffalo 1901.’

Moreover, the fraught circularity of current day subject matter, still invariably resonates; especially in a poem such as ‘Removal,’ where Sousa deftly proclaims:

We’ve set fire to your cabins and crops,
our plows have found your people’s graves.
We’ve made other arrangements:
just over the river, four-hundred miles
west, land is waiting; for each family a blanket.

So far as the many thousands of Syrian migrants currently landing on European shores almost everyday are concerned – which resonates like nothing else – let’s indeed hope there is a blanket for each family.

As unlike (great) poetry, history does unfortunately repeat itself; a recurrence Sarah Sousa obviously knows all too well.