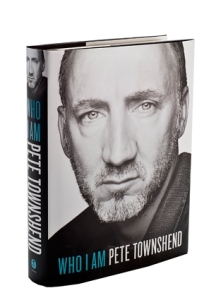 ‘’Historically, The Who’s stage act had revolved around a kind of childish look-at-me competitiveness that had worked well from 1964 to 1968, as the four of us, boys still, tried to get the attention of the audience in our own eccentric way. I jumped around, posed like a Mod fop, squiggled sideways, swung my arm and battled my Marshall stack. Roger swung his long golden hair and twirled tassels on his shawl or his chamois leather jacket, as he sang and produced white noise or explosions by pushing his microphone against Keith’s cymbals. Keith played too many notes and made too many faces, throwing too many sticks and falling off his stool too often, but never lost the beat. John got attention simply because he stood so still, his fingers flying like a stenographer’s, the notes a machine-gun chatter.’’

So bequeaths Pete Townshend in Chapter Twelve (‘Tommy: The Myths, The Music, The Mud’) of this outstandingly compelling and beguiling book, Who I Am. A musically idiosyncratic insight, that in and of itself, many a fan of the semi-solipsistic songsmith, may – one way or another – have surmised for themselves many moons ago. To read The Who’s prime, powerhouse protagonist and fundamental, literary beating-heart; writing and admitting as such, is not only sonorous in the extreme, but also regal and revelatory.

Perhaps poignant is the word I’m looking for?

We are after all talking about Pete Townshend, who, along with John Lennon, has always machine-gunned straight from the nigh sacrosanct hip of socially iconographic honesty. A sometimes-fraught yet more than commendable and valuable if not pristine facet, which in this day and rather unfortunate age of Simon Cowell’s pre-ordained, uber wank fodder of cancerous, ideological persuasion, has become almost extinct.

Indeed, an all-circumnavigating facet, which, if not extinct, then increasingly impossible to find. This then, is just one of the reasons (and there are many) that accounts for this book being something of a refreshing reminder that a very substantial semblance of the musical truth, did actually once exist.

For if there’s one thing that Pete Townshend has executed exceedingly well throughout his long, pre-eminent and altogether varied career, it’s always been extolling things as they really are. And what he’s ultimately chosen to include amid these 507 pages is absolutely no exception.

Very early on in Who I Am, we encounter just one of the author’s countless reflections upon his childhood: ‘’When Mum paid the occasional visit to Denny and me […], she gave off an aura of London glamour and of being in a hurry, but also of being unreliable. Meanwhile Denny was running after bus drivers and airmen, and I was miserable. I had lost my beautiful young parents to a life of Spartan discipline with a pathetic woman desperately watching her youth slip away. Denny’s feelings for me seemed vengeful (…), as did Mum’s abandonment […]. At the age of seven, love and leadership both felt bankrupt’’ (‘It’s A Boy!’). While eleven chapters (and a mere eighteen years) later, Townshend is more than just a little introspective with regards his own familial responsibility: ‘’I was 25 – a young man still beset by anxieties and insecurities, who had no idea how to reconcile a growing family with the new pressures presented by The Who. As a result I found myself living in a bubble of denial: I would tell the band they came first, and I’d tell my family the same thing. I didn’t except that if I served one well I would probably fail the other’’ (‘Lifehouse And Loneliness’).

Replete with a keen eye for almost exceptional detail, these thirty-two chapters cover most, if not all aspects of Townshend’s career as a sublime, yet restless, curious, chameleonic artist. An artist, whose interviews I’ve always, always made a point of reading. Reason being, not only does he sting with all the gravitas that an exceptionally shrewd, intelligent and gifted talent entails, but he does so with a resounding, contemplative uncorruptibility, that is simply beyond compare.

Towards the back of the back, in a chapter touchingly entitled ‘Letter To My Eight-Year-Old Self,’ he writes: ‘’Julia Cameron also suggested writing letters to oneself, and during this period I wrote one to Pete Townshend, aged eight. It proved to be a crucial act of affirmation that eventually helped to heal the pain and hurt I had been harbouring all my life: it started me on the path of becoming more at peace with myself over the next decade, and of forgiving myself for whatever it was that still intermittently caused me anxiety, guilt and shame.’’

Who else might have the sheer strength of character and conviction to write such open-ended, high-octane, revelatory, self-rumination and analysis? Robbie Williams? Katie Price? Liam Gallagher? The closest Rod Stewart came – whose hugely disappointing biography I recently reviewed – was admitting: ‘‘You’re a 45-year old man and you’re flying in shags. Is this what you now amount to? Is that all you’ve got?’’

Like The Who itself, Who I Am is something of an exhilarating read.

More importantly, it sets the benchmark for which surely all future (rock’n’roll) biographies will have to undoubtedly be written.

As is written on the sleeve, this book really is: ‘’a chronicle of ambition, controversy, relentless perfectionism, rock’n’roll excess, emotional and spiritual turmoil, and ultimate redemption.’’ Resulting in it perhaps being the most poignant and powerful, honest (and in parts) harrowing biography I’ve ever read by anyone.