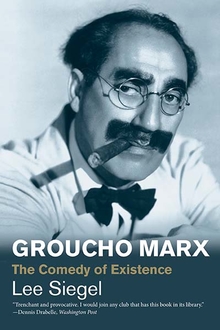 […]no human being lacks a dark side, and those human beings whose achievements rest on creative expression proverbially draw their art from their dark private undersides – comedians do this above all. Until he appeared on the scene, no other performer exhibited a private side to the public the way Groucho did. Groucho Marx the beloved icon is a contradiction in terms. The foundation for his beloved iconicity is his unprecedented and unsurpassed frankness, and this brutal candour was indivisibly connected to a toxic element […].

We are not allowed to forget that he is, by any social measure, a rat, and an unsuccessful rat at that. But it is his compulsion to expose his own folly along with uncovering the knavery and stupidity of everyone around him that wins us over and makes us laugh. There is a unique sort of integrity to that. Nothing redeeming or pardonable exists about Groucho’s misogyny. Yet it is an honest expression of an ugly human tendency that is rarely revealed – until, you might say, it is too late – for what it is. Like arsenic in rice, the poisonous underside of Groucho’s candour was an organic part of his candour.

One cannot help but read this most socially beguiling of book’s without having to nigh constantly stand back and embrace abject objectivity. An interesting undertaking perhaps, but one that after a mere two chapters in, does become either a tad irksome or something of a most pronounced revelation (of sorts).

As such, there is no denying the fact that Groucho Marx – The Comedy of Existence ensures the reader is on constant alert. By which I mean: one has to readily decipher for oneself: what the truth is, what could be considered as nothing other than overt, over analysis, and what at the end of the day, may ultimately be deemed complete and utter ‘’pompous poo-bah.’’

Nevertheless, these seven chapters (along with an Introduction and Epilogue) do make for intrinsically interesting and entertaining reading; simply by way of being open, honest, and socially/scientifically psychological. To quote Shon Arieh-Lerer, who in Slate, wrote: ‘’Siegel applies his own philosophical acuity to the personal and socio-political aspects of Groucho’s life.’’

Key, is the word ‘’philosophical’’ here, for in referring to Antonin Artaud’s 1932 essay on the Marx Brothers, Lee Siegel writes: ”We have to admit that the humour also includes a certain amount of anxiety – even tragedy – and fatality (neither happy nor unhappy but very awkward to formulate), which runs through it like the revelation of a terrible affliction across the profile of absolute beauty (‘Nothing Will Come Of Nothing’).

Moreover, it is without doubt, that it is Siegel’s own idiosyncratic interpretation of the fundamental life and times and art of Groucho Marx, that essentially underpins these 144 pages throughout. Thus, ensuring they are either readable and believable, and/or, readable and (quintessentially) inconceivable.

A perfect example of which can be found on page 51, where the author is w-a-y over the top when he writes: ‘’Comedy is the naked expression of the spectrum of psychic injury, from amusing slights to resounding blows, and few injuries hurt so much as wounds inflicted in the arena of love and lust.’’
This I completely agree with, although Siegel then immediately follows up with accusatory pomp – the sort of which is surely fraught with the finest of conjecture: ‘’The Marx Brothers’ misogyny can sometimes be appalling – the end of Horse Feathers, when all three Brothers pile onto the college widow, in a kind of gang rape, is hard to watch.’’

If such be the case (and to my mind, it absolutely isn’t), then great swathes of some of the finest comedy ever written and performed might just as readily be deemed ‘’hard to watch.’’ The American stand-ups’ Lenny Bruce and Phil Hicks come to mind. Not to mention the British writer/comic genius that was Peter Cooke. As for the likes of Benny Hill, Siegel would probably term him as the devil incarnate.

As spirited and enlightening as Groucho Marx – The Comedy of Existence clearly is,
it is also (in parts), equally claustrophobic, derogatory and rather conservative.

This entry was posted in Book Review. Bookmark the permalink.