The Beatles VS The Rolling Stones 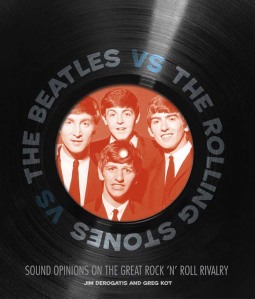 The Beatles vs The Rolling Stones
Sound Opinions On The Great Rock’n’Roll Rivalry
By Jim Derogatis and Greg Kot
Voyageur Press – £20.00

Apart from the fact that this book is ever so lavishly designed: great (black and white as well as colour) photographs and chronological pullout time charts that lend it an intrinsically infectious persuasion; it invariably fuels an elongated debate in such a way as to either re-confirm or re-consider ones’ staunch standpoint. It’s something of a literary template, a premise of sorts, from which to embark howling from the rooftops that either The Beatles or The Rolling Stones reigneth supreme.

Even though in my opinion, there’s no real competition – as for every one decent song the latter wrote, the former wrote perhaps twelve great ones – The Beatles Vs the Rolling Stones – The Great Rock ‘n’ Roll Rivalry

still makes for a terrific read. Even if only to marvel at some of the aforementioned ace photography and take on board some of the (more interesting, questionable, fraudulent, myopic, dismissive, weak, suggestive, colourful and indeed sound) arguments both for and against.

To be sure, throughout the book’s 183 pages, Jim Derogatis and Greg Kot argue their case in a manner that’s perhaps more discursive than it is academic.

Rather like a more focused Mark Radcliff and Stuart Maconie (only without the Northern charm and the petulant flippancy), it’s clear from the outset that the two authors are clearly in the Stones camp. In Chapter Three’s ‘Nothing Is Real – Two Divergent Paths Toward The While Light’ for instance, Derogatis writes: ‘’When it comes to the psychedelic years, I have to say that it always bugs me that the Beatles are portrayed as the Acid Apostles of the New Age, leading rock’n’roll into the psychedelic flowering of the mid-Sixties. The Rolling Stones are considered to have sneered at the genre – the drugs, the sounds, and the whole ‘’peace and love’’ hippie movement – dabbling in it reluctantly, at best, and laughing at it, at worst.’’

If such is the case, then why did The Stones release the tenuous Their Satanic Majesties Request a mere few months following The Beatles release of Sgt. Pepper’s Lonely Hearts Club Band? Did it not have something to do with the ever so simple fact that whatever The Beatles did, The Rolling Stones did? Usually six months after the fact might I add. John Lennon was even known to have quipped as much to Mick Jagger – who had (unsurprisingly) yet again managed to ‘drop by’ yet another Beatles recording session at Abbey Road.

That the authors absolutely root for The Stones throughout, is absolutely fine by me; although it does reveal a certain amount of dissent amid what ought to have surely been a thesis more considered. That said, The Beatles Vs the Rolling Stones

is a lot more fun than it is scientific, which, if truth be known, is what it’s all about.

Thus, making any thorough examination a tad superfluous. Reason being, idiosyncratic inspiration, not to mention escapism and a feel-good foreboding were what the two bands in question, during the sixties at least, were fundamentally all about. Certain qualities of which, are magnificently captured within these eight chapters; none more so than in perhaps the book’s first premise: ‘’[…] in the end, the only real answer to the question ‘’Beatles or Stones?’’ is ‘’Both!’’

A sound opinion? That’s for you to decide.

This entry was posted in Music, The Beatles and tagged Greg Kot, Jim Derogate, John Paul George and Ringo, Stones versus Beatles, The Beatles, the Fab Four, The Rolling Stones. Bookmark the permalink.