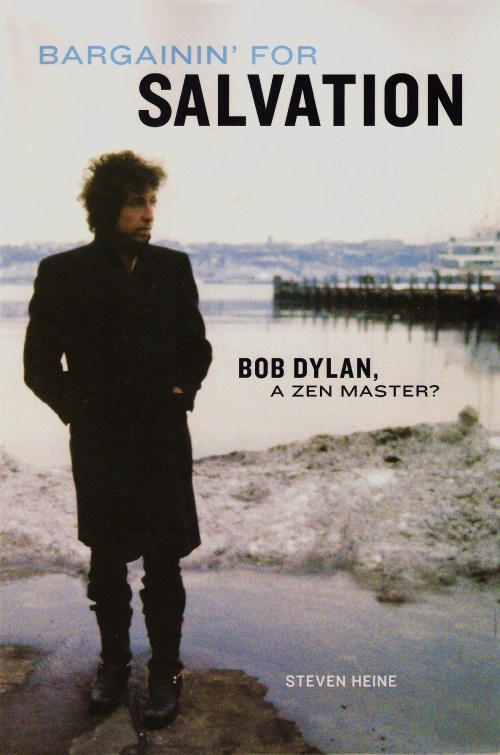 A reviewer in 1965 says of his change, ‘’Dylan used to sing like a lung cancer victim singing Woody Guthrie. Now he sounds like a Rolling Stone singing Immanuel Kant.’’ Allen Ginsberg speaks of Dylan putting philosophy in a jukebox, and another commentator refers to him acting like ‘’Rimbaud with a Rickenbacker.’’

So states Steven Heine in Chapter Six ‘From Protesting to Detesting’ of Bargainin’ for Salvation: Bob Dylan, a Zen Master?

Colourful, cryptic and perhaps a more than controversial consideration of an artist at the peak of his career; said words are a mere tiny tip of an enormous literary analysis. More academic and dense than an evening with Samuel Beckett discussing the subliminal components of Ulysses (cheers up kids, only another one hundred and thirty seven and a half bad moods to go…), this book is a concentrated dissertation of the highest order.

Writing of an artist whose acute ‘’authenticity […] is equivalent to individuality,’’ Heine investigates the majestic mystery and mastery of Bob Dylan’s incredible corpus – in a manner that is simply commendable and in parts, compellingly original.

By thoroughly examining the degree to which Bob Dylan’s consistently complex array of works have fundamentally veered between two distinct worldviews – that of Christianity and Zen Buddhism – the author sheds much new and important light upon the perception and understanding of the Dylan songbook.

As such, one can delve into any section of this book at random, and not only read something new and enlightening, but come away with an altogether glowing and inspired perspective.

For instance, the title Bargainin’ For Salvation is a line taken from the song ‘Shelter From The Storm’ – a song upon which Heine clearly places an abundance of veritable value: ‘’The song deals with Dylan’s relation to his lady, who once ‘’took [his] crown of thorns,’’ thus relieving great struggles and hardships while offering joyful consolation. But, eventually, he tragically alienated her. Now that she is lost to him and he is walking on ‘’a razor’s edge,’’ and is unable to retrieve the time ‘’when God and her were born,’’ he longs for, yet experiences insurmountable difficulty, in becoming free from anguish and sorrow in order to gain redemption;

In a little hilltop village they gambled for my clothes

I bargained for salvation an’ she gave me a lethal dose

I offered up my innocence, got repaid with scorn

Such idiosyncratic investigation promotes the song unto another level of thought; for upon philosophical interjection, Heine nigh manages to turn ‘Shelter From The Storm’ into that of a stage play. But, not before having woven a deep deconstruction into the final analysis: Dylan’s ongoing process of spiritual seeking has been pursued either through introspective self-discovery and self-reliance or via reverence and respect for a salvific power accompanied by eschatological anticipation. Despite his profound desire for salvation, both of these paths have generally resulted in doubt and confusion, or mistrust and disappointment. According to ‘Shelter from The Storm,’ Dylan received a Christ-like self-sacrificing treatment in that he was given a ‘’lethal dose’’ of salvation while suffering scorn in exchange for his innocence.’’

And herein the author writes of just one song!

For Dylan fans everywhere, I’d consider placing this book up there with the likes of Clinton Heylin’s Bob Dylan: Behind the Shades Revisited

and Greil Marcus’s Like a Rolling Stone: Bob Dylan at the Crossroads

– even if it is a little dense.

10 responses to “Bargainin’ For Salvation Bob Dylan, A Zen Master?”